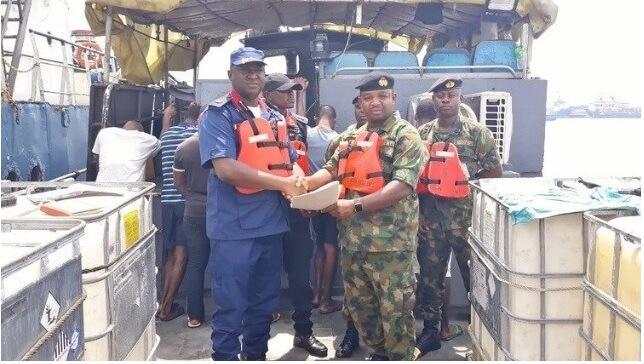 As part of its mission to secure the coastal waters of the world's piracy capital, the Nigerian Navy recently intercepted a small craft and arrested its occupants for a criminal offense: providing security services to a merchant ship.

According to a spokesman for the Nigerian Navy, the service received a tip that the "rogue vessel" Workhorse was providing an escort to an oil tanker, the Osamewe. The naval base NNS Pathfinder deployed a gunboat crew to Bonny Anchorage to intercept the Workhorse. Upon arrival, the Nigerian Navy boat crew determined that the seven civilian-clothed crewmembers onboard Workhorse could not "provide the appropriate permit" to operate as a security vessel, and the team arrested them.

Having concluded its interdiction and investigation, the Nigerian Navy handed over the suspects to the Nigerian Security and Civil Defence Corps for further processing. “We will immediately launch a credible investigation for possible prosecution of the suspects and any other culprits involved with the case,” said Abdullahi Umar, Assistant Commandant of the NSCDC for Rivers state, in a statement to local media.

The Osamewe has no record in Equasis or in commercial AIS databases.

Nigeria forbids the presence of embarked private maritime security contractors in its waters. This effectively prohibits Gulf of Guinea vessel operators from using onboard armed guards, which have proven successful in deterring pirates in the high-risk area off Somalia. Instead, Nigeria permits private contractors to provide for-hire Security Escort Vessel (SEV) services using civilian boats and armed Nigerian Navy active-duty servicemembers. According to one well-regarded security services firm, this system has historically been challenged by "extremely high costs and issues of poor performance and reliability."

The Nigerian Navy's security services have come under considerable international scrutiny, both for their difficulties in securing the Gulf of Guinea and for their endemic corruption. According to a comprehensive review by Prof. Åse Gilje Østensen of the Royal Norwegian Naval Academy, "corruption is pervasive in the Nigerian maritime security sector and facilitates the very crimes that the Navy should be countered, such as smuggling, piracy, and oil theft . . .  studies in general report that naval officials have been taking bribes, covering up illegal activities, diverting resources intended to fight criminal activity, and providing direct assistance to criminal actors."

This problem exists within the broader context of corruption in the Nigerian military and the civilian government. In the latest Transparency International corruption perception survey, Nigeria ranked144th of 175 nations, tied with Comoros, Guatemala, Kenya and Mauritania.